Our Success Is Your Gain

White whale, unicorn…call it what you like, we have successfully wrangled one of ours, and everybody survived the process, including the cannibal! 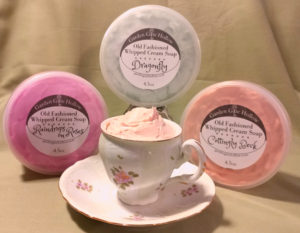 For a while now, I have been trying to pin down cream soap…whipped cream soap to be precise. I did what anybody nowadays does when my interest was first piqued, I Googled. There is, or at least was, very little information on how to actually make cream soap, let alone pre-created recipes. Everywhere I did go, I found references to a Yahoo! group for experienced soap makers, only that sounded as difficult to join as the Free Masons.

After my initial searching proved basically fruitless, I moved on to other product endeavors. There are, after all, plenty of bath body and spirit products waiting to be imagined and brought to life. 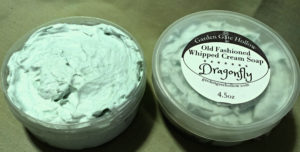 erested in cream soap. Every few months I would drift back to the subject, with pretty much the same results. Each time, I would get progressively more frustrated.

Finally, several months ago, I thought I had a breakthrough! I came across a reference to a soap calculator to make cream soap. I was thrilled, then I saw the soap calculator….then frustration returned. I did not understand the reason behind most of what was there. It made very little sense to me. I searched again, but found nothing to explain the whats or whys behind formulation. And how can I create something fabulous for you, if I don’t know the whys about what goes into the formulations?

My real breakthrough, if you can call it that, came about one month later when I happened accross noth one, but two recipes for cream soap. One of them had easy to follow directions, with pictures too! I was so desperate, I tried it out, just as she had written. I even had all the oils that she included and everything…it must have been a sign, right? Not really.

This is why I don’t like following someone else’s recipes blindly. I cannot troubleshoot anything properly, if I don’t understand and whys of what’s in it!

This is no different. I followed her directions and did  manage to make a rather nice cream soap. But…it was far too runny and would not whip, let alone form peaks. Aaaaaaghhh! So close I could touch it, but not quite right! It is like panning for gold and finding pyrite.

After that, I decided this was the best I could do and my visions of all of the wondrous products I could make with whipped cream soap would just have to go in the dream column (spoiler, that’s not what happened).

Shortly after my Moon landing that turned out to just be a slingshot around the moon, we ventured to our local supply shop to restock on a few things. As we were checking out, I impulsed. Right next to the counter was a little booklet titled “Making Cream Soap” by Catherine Failor. I grabbed the book, without glancing through it (I already knew Failor as a liquid soap guru, so I had faith), and tossed (politely placed) it up on the counter.

I read through the booklet that evening, it is only 40 pages, so it did not take long. The heavens opened and the angels sang. This booklet had all of the information I had been looking for. It explains the reasons behind different ingredients, the soap making process, troubleshooting and even has a bit on figuring out how much lye is needed with out needing a soap calculator.

That will come in handy after society and the internet falls.

Using all of the fabulous information she shared, I created my own batch of cream soap, troubleshot it when it wasn’t perfect, then did a little jig after it whipped up perfectly.

S-U-C-C-E-S-S, that is how you spell success! Thank you Catherine Failor!

After searching and discouragement, we have finally achieved one of our goals. I really wanted to have fun with a foaming bath whip type product, without buying a pre done base, we don’t buy bases here. Now, we actually have something that, I think is much better.

Look out for whipped cream soap based creations in the future. I hope you are as excited as we are!